So, how to attach net to trampoline quickly. Putting a net on the trampoline isn’t rocket science and anyone can do it actually. The key steps include pole assembly and securing net with pole and trampoline. However, it’s recommmended to pracice this so you can do it without much hassle.

So, here I’ll guide you to assemble and removal of trampoline enclosure net in the easiest ways.

How to Put on Trampoline Net Step By Step?

Now, we’ll instruct you on the general guideline on how to install the trampoline net in the right way. You can easily install a net on the trampoline following some basic steps. Let’s know the process in detail.

First of all, gather all the necessary things to assemble a trampoline net. If you buy a new trampoline, most probably, there is already a safety net. But if there is no net, purchase one. Alternately, while replacing the old net with a new one, you also need to purchase a net. 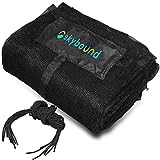 Before you hop on connect a net with a trampoline be sure there is ample clear space above the trampoline bed. If there is any hindrance in the top or surroundings like the roof, eaves, tree branches, or other things, clear the space. Alternatively, you can move the trampoline to a new place, having adequate headroom space.

If you are replacing the enclosure net, the poles are already connected to the trampoline. But if are installing a newly purchased trampoline, it’s necessary to install the poles in the right place to hold the trampoline net.

Trampoline poles either come in a single post or multiple sections (usually two). If a pole consists of several parts assemble them first to get the full height. The upper part of the pole is called the upper pole and the lower part is the lower pole.

In general, poles or posts of the enclosure are attached to the trampoline frame by nuts and bolts. Some poles are extended to the ground and need to fix them with legs for better stability. Usually, quick clamps are used here to secure poles with legs.

Straight poles and curved poles have tapered ends for lower poles. Secure them in the right spots with the frame using nuts and bolts. Then put the upper poles caps on the top of the poles. If poles are extended up to the ground, fasten them with legs for further firmness.

The specially designed poles attachment systems require some more effort. For example, in the top-ring pole enclosure, you need to attach the top ring over the head of the poles. The attached pole enclosures come with a pre-attached net with the support posts.

Phillip’s screwdriver or electric drill might help you secure the nuts and bolts of the poles quickly.

See Also: Inside net vs outside net trampoline

To reduce the accidental bumping impact, it’s recommended to cover the poles with foam paddings. Some trampoline manufacturers deliver these with the trampoline package. But you can also purchase them at affordable prices.

Now, find out the bottom edge of the enclosure net and tie it with all the designated places of the poles. Also, put all sleeves on the top of the posts. Do this at a time and don’t mess it up.

Read Also: Things to put under the trampoline

Step 7: Tie the Bottom Part of the Net with the Frame

At this stage, tie the bungee cords to the bottom of the net and attach them to the trampoline frame. This will secure and extend the safety of the lower part of the net. It eliminates the chance of rolling and falling the kids down from underneath the net.

Step 8: Secure the Top of the Net

If you want to make trampoline more entertaining, attach a basketball hoop or other fun accessories with the net or poles. This will keep kids active for longer periods. After installing the net, bring the ladder in front of the doorway of the enclosure net.

So, the net is now installed properly with the trampoline. However, it’s recommended to recheck it before kids jump there. And finally review all the connections, knots, and poles to be sure the trampoline is now safe for children.

Congratulations on putting together the safety net on the trampoline successfully! Now, the trampoline is safer to jump than without a net fixture. So, you can now allow kids to jump there without falling to the ground.

Still, if you need more ideas, see the video below and learn how to install a safety net on a trampoline perfectly.

I have already discussed the easiest way on installing trampoline net correctly, however here are some more tips that would help you complete the process more conveniently.

Read Also: Do you have idea on trampoline cost?

How to Take Down a Trampoline Net?

Don’t worry, we’ll cover all these so you can put down the trampoline enclosure quickly.

1. Poles are Directly Connected to Frame

2. Net is Connected to the Bottom

When the safety net is attached to the bottom of the frame, you need to detach them besides removing it from the upper poles. In this case, just remove the pins from the pole’s top and take away the net quickly.

After removing the net and its components from the trampoline, it’s recommended to put the small things in any storage box or container to avoid losing any part. Also, wrap the poles using tape and keep them in any dry and safe place.

And keep the net inside after a quick cleaning.  If the net has accumulated birds’ poop or other debris, clean them by rinsing or in the detergent solution. After making the net dry store it inside.

1. How to install a net on the Springfree trampoline?

Ans: At first, raise the net over the side of the mat. Although the net is flexible and slides well, still it may seem quite tight due to the new net. Now unfold the net rods and put them correctly into the pockets of the top net.

After that, place the lower end of the poles in the designated sockets in the frame and lock them using C-clips. That’s it! And if you want to detach the net on the Springfree trampoline the process will be just the opposite of installing the net. Here is a video that explains the process elaborately.

2. Why you need to detach a trampoline net?

So, you might now agree with us that trampoline net installation is an easy task. By following the above-mentioned steps, you can easily assemble a net on the trampoline, without much effort and there is no need for special skill to do it.

Hopefully, after reading the article, you can now know the ins and outs of how to put the net on a trampoline. Let’s enclose the trampoline with a net and extend the trampoline’s safety significantly. Enjoy safe trampolining!

Robert is a trampoline and rebounder trainer with a passion for blogging. He discovered his love for trampolining at a young age, when his father gifted him his first trampoline at the age of 9. Over the years, Robert has honed his skills and knowledge in the field, and now uses his expertise to train others.

Picktrampoline.com is the brainchild of Robert and Rebeca. They are fitness trainers and recommend trampolining and rebounding for better health and happiness. Read their blogs to get awesome tips on trampoline and rebounder.

We may earn small commissions when you buy through our links at no extra cost to you. See more